Protesters in Chattanooga for a fourth day express anger at a political and legal system that accepts routine abuse of the poor and blacks and has shut its ears to appeals for redress.

More than 400 people gather for a peaceful March beginning at Miller park downtown in front of the federal Joel Solomon building and taking them in a loop to the county justice building housing criminal courts and the office of Sheriff Jim Hammomnd and then to a federally subsidized housing project.

The rally spokesman, hip hop artist Cameron “C-Grimy” Williams, insists the event be peaceful and it is. Police maintain a respectful distance and help the group traverse street and walkway by blocking the travels of cars and trucks as demonstrators cover four city miles, signs flickering, cellphone FB live feeds glowing on young faces. Officers ignore the rich odor of American agriculture products lit and puffed by many enroute to a hoped hallway of justice.

Nine officers gang up and arrest a marcher toting rifle and ammunition. Mr. Williams objects. “I am totally for the second amendment, so bringing your weapon is totally your choice,” says Mr. Williams. “But I would like to see solidarity on the protest side with no weapons, showing them that we are peaceful and mean no harm, but at the same time I do believe we should protect ourselves and practice our constitutional rights.”

The protests in Chattanooga coincide with those around the world against police violence and immunity. The feedback mechanisms that allow for the maintenance of peace in a society are broken down and the system is facing increasing internal violent pressure because it will not allow itself to be repaired.

The feedback loop that allows for self-correcting dynamism in society in Hamilton County is broken at several points.

➤ The government-spoiling independent power of the grand jury is long neutered, with judicial favorites named foreman who like the other 12 members have voting power on indictments. The grand jury foreman Hugh Moore refuses to grant me right to testify of an officer’s criminal false arrest of a citizen.

➤ Jury trials are a rarity because the state, providing public defenders for indigent defendants, wins plea bargains in almost all cases, working both offense and defense in criminal matters. The rarity of trial has long allowed a buildup of wicked custom among cops: Harassment, perjury, planted evidence, fabricated cases, hidden and lost evidence and other forms of abuse. Officers know they most surely will not be held to account with close examination of their doings at jury trial.

➤ Pleas and petitions of remonstrance are rebuffed. City council and county commission high-handedly snip public comment after 3 minutes. The general assembly slaps down the “address and remonstrance” movement launched by CPA John Gentry of Goodlettsville, and refuses to correct a false version of the state constitution published on line.

➤ City and county refuse to abide by a legal notice by the citizenry, as if long-established doctrine of legal notice can make no claim against their power merchant. In one notice beyond 830 days, a citizen declares unrebutted the state of the law regarding so-called “traffic stops,” and elected bodies make nothing of it, don’t even pretend to exercise fiduciary duty toward the people in their rights. Tennessee transportation administrative notice, an effort at racial reparations in favor of blacks and the poor, wins no action, as risk piles up against law enforcement employees.

➤ Insiders are sapping billions and billions of dollars in the federal bailout, where citizens get a meager $1,200 a person and corporations and billionaires get the rest. Moral hazard abounds, crooked insider details multiply in the world of high finance, and disincentives and irrational policies control the state and federal bailouts in the state-induced CV19 depression. Gov. Bill Lee and Mayor Andy Berke loll about, unscathed by any violent reaction to their acting in the alleged emergency outside legal authority.

“At this time, at this moment, our voices will be heard. *** I don’t know about you all, but I seen way too much of this, I’ve heard way too much, I’ve had to stand with my fist in the air like this for so long. And I know some of you are older than me a long for this mess. But today, today, we are together for a special purpose. And I will always stand for this special purpose,” with much applause following.

Says organizer Williams, the people are fighting a war for “justice and peace, equality, that fight has just become a war, because we have been declared war upon — yeah, make some noise!” [Applause] “Whenever the ones that were elected to protect us and make decisions in our favor declare war upon us, times are grim, and that’s why we are all here, because times are grim.”

Grason Harvey, who works full time at a local Wal-Mart, says she has had at least two negative encounters with police. “It’s hard being stereotyped and not being able to go nowhere without being looked at, questioned or being treated as a different species.” She insists she is “not trying to start a race war, but to end it, to be equal.” She feels trapped, she says, when encountering police.

Daisja Lattimore leads a raucous cry, “Hands up, don’t shoot.” Over and over again — a pathetic indictment of life in a police state with presumptive authority by the cop over the citizen. “No racist police. No justice, no peace.” she cries. Much of the discourse among the protesters is laced with profanity.

The desiderata for Mr. Williams include sound reforms, but also easy money for free lala-land aspirations dreamed of by Fabians since the 1800s. Eliminate cash bail, he insists. Free prisoners convicted of nonviolent victimless crimes. Free all inmates at risk for CV-19. End private prison systems: “No more profit off of inmates.” Divest in police, invest in the community. “And legalize it, baby!” (marijuana).

These bullet points he makes early in the evening. Later, in an FB interview, Mr. Williams proposes “liveable wages” for all, a nostrum among idealists who envision enjoying a planned economy and centralized management of life under the strong hand of state ministry.

The system is cracking and may collapse in a heap, either in a violent revolution or in an economic hyperinflation in which the excess of credit and money diminishes the value of the dollar so rapidly that despite gigantic dumping of dollars in the economy, there is not enough money and illiquidity and insolvency spreads.

The system does not allow for correction. Government, the economy and the people no longer have an organic relationship. It is a closed system, with warning signals and correctives muffled and hidden.

It is a static system, a brittle system in which only those at the very top prosper and have great liberty. Liberty has been absorbed by the state whose disasters and proprietors at the top have absolute free reign to do as they will with no accountability, either for criminal acts or civil torts or wrongs and frauds.

City council members air their views Tuesday on the protests, one of them insisting voting makes a difference and that not all cops are bad. “All of the people that’s out here protesting, we need you voting,” says Demetrus Coonrod. “That’s how you effectively make change. Not saying ‘F 12’ because we need our police officers. We need them.  They’re here to serve and protect us.  There may be some bad apples that’s along the way, but take a look at what’s going on in our own community, our own culture. We got to be honest with each other.”

As the lower levels in society, in the streets of Chattanooga and in the poor neighborhoods, slight infractions bring criminal charges. Real crimes remain unsolved, but against commoners the trucker and shipper law is misapplied knowingly and intentionally, giving grounds for their interrogation, search and arrest — and now to their uproar of anger.

How to fight back vs. illegal traffic stops in Chattanooga, Hamilton County 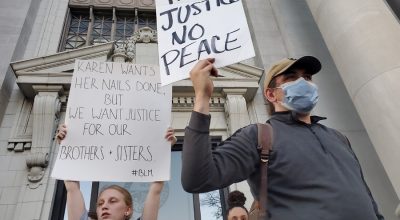