City government has been on notice for more than two years about criminal acts by Mayor Andy Berke’s police department which the mayor refuses to stop but which city council has an indirect hand to control.

The city was put under transportation administrative notice Feb. 20, 2018, by a local journalist who had researched the state transportation and motor carrier code and whether they are properly applied. They’re not. It is a footwide law applied as if it were a yard wide, promiscuously on people not subject to it. City police do not have authority to enforce the shipping, freight, trucking and transportation law on people not involved in that privileged line of business. Only the department of safety has that authority via the Tennessee highway patrol.

Four hundred protesters gather at Miller Park on Thursday and march through the streets in their continuing reposte against police violence in Chattanooga and across the U.S.

“Whose streets?” “Our streets!” comes the reverberating cry. “Can’t hear you,” Grason Harvey bellows into a bullhorn.

The protests in Chattanooga have been peaceful, with no looting, vandalism or rioting, though some acts of belligerence ended in arrest of more than a dozen people.

The week has been marked by police rioting as well as rioting by members of the public. Helmeted and armored officers have attacked peaceful citizens in protests. Video clips show officer shootings, beanbaggings, gassings of homeless people in wheelchairs, arrests of clearly marked press workers, beatings of women on the pavement and acts of aggression against individuals who are not violent and appear to pose no threat.

Ubiquitous cellphone coverage during protests expose police abuse and help citizens keep police accountable. In Chattanooga, people by the dozens run FB live and keep up with friends as their phones bob in front of them while they step over curbs and traipse down the streets. With people everywhere using publishing equipment, pressure is high upon state actors to restrain themselves, yielding a more open society.

In Chattanooga a second pressure relief valve is the racial reconciliation project of administrative notice.

City council members have not been at five of the six protests I’ve covered. Neither has Mayor Berke. They are detached from the wide, deep grievance felt by the people.

My efforts to end harassment of blacks and the poor on the has road met with yawns on the part of Ken Smith, Demetrus Coonrod and other city council members, several of whom met with me about the claims of statute and constitution.

The notice is a public document, filed in the register of Rhea County (as Hamilton register Marc Gravitt illegally refused to record it). The notice has been given notorious publication in Hamilton County.  To launch the reform, I personally served the notice on city council and, March 1, 2018, on Sheriff Jim Hammond.

Council member Anthony Byrd indicates he is intrigued by its suggestion of liberty, but unwilling to make any commitment because someone told him the notice is in error and because it doesn’t have support of others. He and people like Warren Mackey on the county commission indicate they are awaiting a sense of a growing “consensus” about halting false arrests and ultra vires [Latin for outside the scope] enforcement.

“Traffic stop” abuse operates on roads and streets as a trap for African-Americans and poor people. Notorious local cases arising from illegal traffic arrests are the beating of Frederico Wolfe by cop Ben Piazza, the traffic stop baptism imposed on a young woman by deputy Dennis Wilkey and the arrest of carpenter Jon Luman of Red Bank and the theft by the sheriff’s department of his truck 372 days ago on May 30, 2019.

The right to petition against government offenses is recognized in the Tennessee constitution. “[T]he citizens have a right, in a peaceable manner, to assemble together for their common good, to instruct their representatives, and to apply to those invested with the powers of government for redress of grievances, or other proper purposes, by address or remonstrance” (article 1, section 23).

Gov. Bill Lee is refusing to correct an erroneous version of the constitution online at the secretary of state’s office that halves the rights of the people on the matter of redress. It refers to “address of remonstrance” rather than “redress or remonstrances.” The state AG is playing dirty in court to block the fixing of the purported typo.

If a typo loots the people of their rights, mayoral permission letting cops operate outside the scope of the law is an official act of looting, as well, and earns little care.

The city has been under administrative notice 836 days; the sheriff, Jim Hammond, under notice 827 days; prosecutor Neal Pinkston since March 26, 2018. None have offered substantive and legally adequate rebuttal, and none have made reforms of police and deputy protocols to respect the people and their liberties and bring about a more prosperous and peaceful city.

TAN is an effort at racial reparations by a Caucasian to African-Americans, and is intended to ease race relations and to halt the most important legally protected functioning of Jim-Crow in Tennessee, and in all the other states. Illegal traffic arrests under the shipping law against people not involved in shipping is protected by the Tennessee courts of appeal, most recently in State of Tennessee v. Arthur Jay Hirsch, July 2017.

The notice project accounts for judicial activism, and seeks to bring relief despite lack of options by way of direct appeal to courts on the “right to travel” that judges deny. I have discovered an unlocked backdoor into the system that will let a petitioner in chancery court overturn the system lock, stock and barrel.

In passing under overpasses from Highway 27, the crowd goes into an exultant hullabaloo in which nothing can be heard, so nothing is said but screams, cheers and uproar — as among children at canyon’s edge or an a fairground house of echoes.

As I pass among the bobbing heads and signs under the highway, in that din, it occurs to me the Holy Spirit makes unutterable groanings in behalf of God’s children before the throne of God, § which to us are indecipherable to our ears but the meaning and intent swimming within and undeservedly reaching into the core of our being.

Cameron “C-Grimey” Williams, activist and council candidate Marie Mott and bullhorn shouter Grason Harvey lace their chants and speech with execrable profanities — “F–k 12” means, for example, “F–k the police,” and many others, including usages such as “motherf—-r” in song and speech. This lack of grace, however, suggests an unwillingness to compromise, and touch on the viscera of the protesters — the talk is fleshly, earthy, dirty, brutal, reflecting their feeling and expressing their anger at the white legal political establishment that controls.

If one can look past it, one hears demands that are constitutional and libertarian ideals mixed with familiar progressive concepts that imply a greater — not a lesser — government.

The prospect of a police-free city is not a mere pipe dream. Abolition is today in the air, supported by academic works such as that of socioligist Alex Vitale (The End of Policing) and journalist Radley Balko (Warrior Cop). In Minneapolis, a group called MPD150 is defying the narrative that policing is essential to public order and proposes a post-police society in that city.

Marlon Carter, a student who often attends city council meetings, is excited that people of different perspectives are united against violent policing. The enemy that unites them? “Really, it’s these racist cops out here. Now, there are good cops. I got nothing against good cops.” Bad cops “go around, abusing their authority, picking on African-Americans, immigrants and gays like, like they’re above the law.”

Says one placard worn by a young woman with bare shoulders and a mask: “How many badges if you turned in?”

Protester Reed Wilson, 20, white, saw too many badges in 2019. He says he’s been subject of 38 traffic stops, two by THP, 15 by the sheriff’s department and the rest by CPD. He says usually he has been allowed to “walk.”

Traffic stops of blacks are “a serious issue” with African-Americans in cars treated harshly while whites are handled lightly, he says. Of one black occupant of his car in a transportation law enforcement arrest, Mr. Wilson says: “He grabbed his genital region pretty hard. He also would reach under his armpits and like down his pants pretty hard as well.”

§ “Likewise the Spirit also helps in our weaknesses. For we do not know what we should pray for as we ought, but the Spirit Himself makes intercession for us with groanings which cannot be uttered.” Romans 8:26 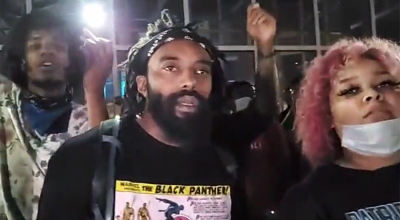