A county commission whose members have ignored a longstanding notice of illegal activity by Sheriff Jim Hammond is not eager Wednesday to let citizens unleash their complaints about law enforcement abuse.

The county government holds the people in contempt. So does the sheriff. If Hamilton County residents don’t use the actual law to their advantage, their 12th protest today over evil policing may be gratifying and heated, but not to be taken seriously.

Commission members cut off commentary by the public in an ersatz public meeting on Zoom on Wednesday morning. A couple of dozen people speak, but a remainder are locked out by a legal fiction.

The legal fiction devised by county commissioner Randy Fairbanks and county attorney Reuben Taylor is that of delegation. Since the callers have more or less the same grievance, they constitute a “delegation” under commission Rule 11 and a delegation deserves no more than 10 minutes. The fact that speakers rambled past 10 minutes shows how gracious the commission is, how forbearing, how connected to the people it is to the people its members represent.

The comments calling for budget cuts to the sheriff and reforms that require officers to respect human life are mostly by Caucasians, and are literate and well spoken. Invariably the demands involve shifting money away from the sheriff’s F$60 million to welfare and social services.

The legal reforms are in two notices that seek to reduce risk to officer’s lives, end a longstanding Jim Crow oppression upheld by the activist judiciary in Tennessee and to restore the authority of black-letter statutes that are “enforced” with disregard to the bill of rights. Both notices on illegal arrests are fresh grounds for litigation and add to the legal liability for the county the element of aggravation and malice. In one false arrest, the sheriff’s office stole a working man’s truck without any legal process.

Commission member Katherlyn Geter says the George Floyd slaying brought “an awakening” in the city and country regarding systemic racism “that go back way back when.” Her view is public safety is more than just what deputies do. It is implied in social services, more funding for the state factory school, access to healthcare, “good jobs in our county and city,” economic policies, housing policies, etc. In other, public well-being with a strong presence of social welfare organizations.

“When you have a break in a contract, you have to pay damages,” she says. Mrs. Geter sees “basically breach in contract” between state and the people. “Our policies and systems, they have broken the contract with people of color.”

She proposes “for us to be proactive and to be intentional,” to own racial injustices and “work on reconciliation” which means to engage and have tough conversations with people of the other race.

David Sharpe says there should be open public forums on reforms and there is “significant room to improve” in the operation of the department to avoid exacerbating the racial animus. He wants to start at the “8 can’t wait” reforms (8cantwait.org), and announces a meeting for June 19 — online at 10.

Commission members Sharpe, Chip Henderson and Warren Mackey want the members of the public to have their say in a week of 10 days of protests. Sabrina Smedley makes a negative comment about redundancy among the speakers.

Unity group, a civil rights group comprised mostly of African-Americans, is angry at the way the public is treated.

“Today’s action by the Hamilton County Commission was outright preemption and will serve as a Fannie Lou Hamer moment for this community. At a time when citizens are peacefully participating in civil disobedience, on top of a global pandemic that has exacerbated the economic prospects of an untold score of individuals, to limit public discourse on these and other vital topics was abstract and arbitrary.  Many who tried to give comments during the session were denied this fundamental aspect of democracy.

“This was not an occasion when a singular group formerly petitioned to air a grievance or perpetuate a stated position.”

The commission’s cavalier disregard of those not making the cut is a contrast to the way in which city council took public comment Tuesday.

The city budget discussion was overseen by Carol Berz, who runs a reconciliation service. She has a warm and enveloping manner, and for seven hours she held on for those who spoke, in a most gracious and considerate way, though no doubt  she and the eight other council members were worn to a frazzle. Dr. Berz chopped many for passing their time.

“The Hamilton County Commission was derelict in their duty” to lop the public tongue.

After a brief review of the American political scene, including the CV-19 depression and the killing of George Floyd, the Unity statement cites the claim of the rule of law.

“These morally imperative topics merited our full attention, and to choose to be ambivalent to these questions is likened to striking the albatross. Our government still operates under the will of the people, the rule of law and the consent of the governed, and the people deserve to be heard.”

Says Mrs. Smedley: “I really have to look up and focus on the positive. *** As a Christian, I am committed to praying for our country our nation, and to pray that somehow we find peace and unite as nation and that the evil that is out there be exposed and dealt with swiftly.” 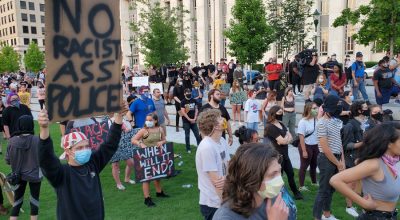