The responses of Gov. Bill Lee and mayors across Tennessee such as Andy Berke of Chattanooga to CV-19 is to aim the weapon of police power upon people who are not lawfully subject to it — they are not sick, and have not been seen committing a crime.

The authorities, in short, have pivoted the searchlight powers of the quarantine statute around upon people not subject to the scope of the law.

They are reaching, shall we say, a “broader market” for their cordial, their social engineering medicine.

The statute has in view those people who are sick, those who are physically proximate to sick people and, thirdly, those coming from locations in which disease and contagion are known to be prevalent.

The governments in Tennessee have done what is not in view in light of the Constitution protections of the people and in light of this statute’s power. They have pivoted the ordinance and statute around, and aimed it at well people and the general population.

They have taken a rifle, loaded it with birdshot and used it as a shotgun against the wrong party.

This process announced April 3 by Messrs. Lee and Berke violates an essential tenet of constitutional government. That is, that one who is the object of police power be specifically identified as a wrongdoer by legal process in a judicial setting. The look of that process is outlined in the tuberculosis section of the title, at Tenn. Code Ann. § 68-9-206, Incarceration of suspect — Procedure — Appeal — Violation of quarantine.

While it is hoped that law enforcement officers will not use their authority maliciously, the prospect of violence by police and biteback by the people is ahead if this panicky emergency is not quickly brought to an end.

The quarantine statute in Tennessee is at Title 68, giving police power to the state department of health.

It requires that the commissioner of health or her designees stop the spread of contagion with the “least inconvenience to commerce and travel.”

Whenever yellow fever, cholera, smallpox or other epidemic diseases appear in any locality within the state, and information thereof is brought to the knowledge of the department, the commissioner shall prepare and carry into effect such rules and regulations as, in the commissioner’s judgment, will, with the least inconvenience to commerce and travel, prevent the spread of the disease. [Emphasis added]

The phrase “least inconvenience to commerce and travel” appears in this provision twice.

Gov. Lee and his copycat mayors in the cities have banned commerce and travel — but erected a regime of exceptions and defenses.

The categories of essential and nonessential businesses and essential and non-essential reasons, rationales and purposes are the terminology with which the abuse is managed. These designations, I believe, are outside the scope of their authority as delegated by the Tennessee constitution. The classifications are arbitrary and capricious, and not granted to be made by either governor or mayor.

That reduced threshold is the customary use of the state’s shipping, hauling, trucking, moving, transportation statute. It is imposed upon people by local authorities outside with scope of the statute, which allows only the Tennessee highway patrol to enforce the privilege and tax statute in Tennessee code annotated Title 55 upon privileged parties such as truckers, loggers, dumptruck operators, ambulance services, Uber, moving companies, bus operators, interstate shippers running 18-wheel rigs, and the like.

With CV19, the threshold is about down to the ground. No wall of protection against arbitrary capricious arrest. No probable cause needed except the following. “You are on the road and I have authority is stop you.” The wall protecting the citizenry appears no higher than the curb of a city street.

“I saw you in your car, and I’m pulling you over and I want to ask you what you’re doing.”

We know these encounters are taking place, though Gov. Lee says they are not supposed to. What the governor gives with his EOs he quietly removes in his letter to DAs and chiefs of police.

“I saw you in your car going down the road and I’m stopping you to ask you what your reasons are. I’m wondering what you’re doing here on the road, man. What is the reason for your being here?”

In rural districts overseen by locally grown sheriffs and good-ole boy deputies, such abuses are very likely to be rife.

Under Tennessee’s emergency decree, officer faces no apparent limit in the exercise of his authority, his power to stop arising from the universal medical necessity of social distancing and “staying at home.”

These executive orders need to be rescinded immediately. The state’s economy is crashing all around us, with jobs lost, companies, failings, debts going unpaid, rents overlooked, cashflow stanched in homes and businesses across Chattanooga and Tennessee. 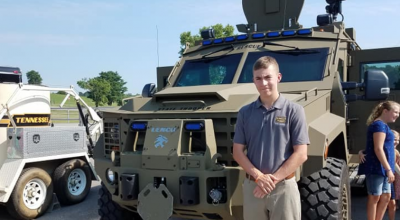